Enroll Now
Intermediate 4-week Class
Practice sculpture punties, bit work, and working inside the bubble. Bring your concepts and explore asymmetry. Thinking outside the box while using specially designed sculpting tools, you will create figurative work and various other sculptural forms. We will focus on figurative sculpting techniques later in class. Bring your favorite butter knife. Hot 1, 24 hours experience or permission of the instructor is required. 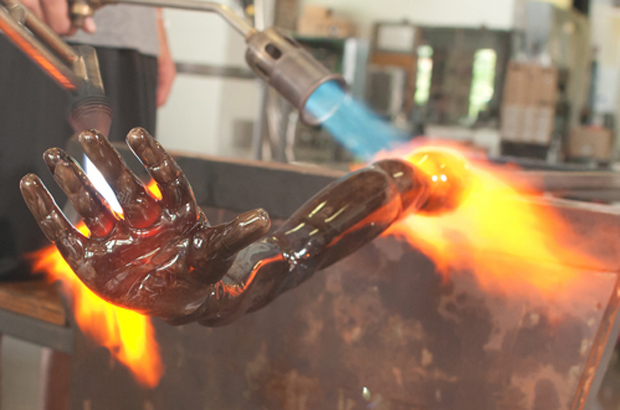 Jaime Guerrero is an award winning glass artist whose work has been featured in museums across the US, currently in the Riverside Museum and Fuller Craft Museum. Last year Jaime was highlighted on the PBS special Craft in America. He was also on the cover of Craft in America Magazine and is currently doing a long-term residency at the Pittsburgh Glass Center. He was recently awarded a grant through the Pittsburgh Foundation for work that focuses on child migration, and is currently working on a solo exhibition for the Pittsburgh Glass Center.

Guerrero has studied with Masters Checco Ongaro, Pino Signoretto, and Clifford Rainey. He received two Saxe Fellowship Awards (2006/2012) and the People's Choice Award (2012) from the Bay Area Glass Institute for his work "Charros y Sus Caballos". This work was later purchased by the Oakland Museum of California for its permanent collection.